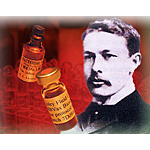 Coley Vaccine (Mixed Bacterial Vaccine), also known as Coley’s Toxins or Coley Fluid (CF) is a treatment originally developed by a surgeon named William Coley in 1893. The treatment consisted of a sterile mixture of gram-positive Streptococcus pyogenes and gram-negative Serratia marcescens bacteria. Using a killed bacterial suspension, Coley could mimic an infection (producing chills and fever) and accompanying immune response, without incurring the risks of an actual infection.

Coley advised that Coley Vaccine was most effective when administered daily, when a fever was repeatedly induced, and when the treatment was continued (at less frequent intervals) well past clinical regression to prevent recurrence.

It has been found that solid tumors often show a high degree of leukocyte infiltration. Even micrometastates have been shown to have a high content of infiltrating leukocytes. These tumor-infiltrating leukocytes (TILs) consist of heterogeneous populations of cells, including varying proportions of neutrophils, macrophages, T and B cells, and natural killer cells. As tumors expand, cytokines are released signaling an increasing need for oxygen and nutrients. It has been proposed that leukocytes, which are also involved in tissue repair, become attracted to growing malignant lesions through the release of these signaling molecules or chemokines, and assume their normal reparative activities such as expanding the vascular network and stimulating tissue regrowth. Recent evidence supports the theory that tumors grow with the assistance, rather than the antagonism, of the immune system. So the administration of Coley’s Toxins is designed to reactivate the defensive activities of these TILs. Active stimulation of TILs by Coley’s Vaccine has been suggested by the frequent observation of inflammation of malignant lesions soon after Coley Fluid injection.